Heartworm Incidence in the United States

Heartworm is a serious, but treatable disease found in most canine breeds. It involves a series of small, filamentous worms forming in the various ventricles and arteries of the canine’s circulatory system. This, rather predictably, is not the best for this canine. It both restricts blood flow and the ability of the heart to function. If left untreated, it will ultimately lead to the death of the canine. If the heart can’t do its job because there are worms blocking it, the organism can’t live.

There is also a strain of feline heartworm, ultimately achieving the same result.

Currently though, there is a preventative treatment with a very high effective rate for both dogs and cats. But, veterinarians think, the reason the incidence rate for heartworm has stayed mostly where it’s been is because people either skip doses or forget doses of their animal’s medication.

According to the American Heartworm Society, the most affected parts of the country are the southeastern United States. This has the majority of clinics in these areas receiving over 100 cases of heartworm per year.

Heartworm as a disease spreads like malaria, through the bites of mosquitoes. This means that if there is a dog with heartworm in the same area as a healthy dog, and one mosquito bites both, they now both have heartworm. This is common in places like southeastern Texas and southern Louisiana. 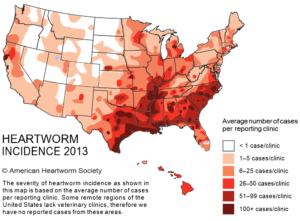 This map provided by the American Heartworm Society demonstrates the prevalence of the most recent survey of heartworm by the AHS. The scale is in cases per clinic; this means that on average for that area, each clinic had x number of cases of heartworm and reported it.

It shows that the highest number of reported cases tend to be in southern, Gulf coast regions; up through the Mississippi River and Atlantic coast. Higher altitude regions tend not to have as many cases per clinic.

Learn The Game of Rescue

Learn Give Gifts not Responsibilities

What if Pets Could Talk for 5min?
Health
5 Mistakes You’re Making When Training Your Dog
Health

Poem Written By A Dog Abandoned At An Animal Shelter
Health

5 Spots to Dine with your Dog in Houston
Health

End of Life Care for Your Pet