Why Do Cats Purr?

Why Do Cats Purr?

Purring is the most common noise a cat can make, but why do they do it? Unfortunately, there is no scientific proven answer to this question. It’s like asking “why do human’s laugh?” We laugh when we’re happy, we laugh when we’re nervous, we laugh when we are uncomfortable. There are numerous philosophies as to why cat’s purr. Just like humans use laughter to cope or express themselves in different situations, there are many reasons why a cat purrs.

When a Cat May Purr:

Because cats purr for various instances, it is almost impossible to “read a purr”. Just like when a baby cries, you don’t always know why they are crying. In fact, cats cry has a similar frequency to a baby’s cry.

Studies show that, because purring has a frequency too low to travel far, purring is associated with intimate and positive social interactions such as grooming or being friendly. Due to its calming nature, purring has also been found to soothe cats during stressful situations.

As a kitten, purring is a bonding mechanism between the mother and her kitten. Kittens quickly start purring just days after they are born – proving it is a natural instinct rather than a learned behavior. During this time, purring is used to communicate with its mother.

The Science Behind a Purr

An easier question may be: “how do cats purr?” Just as humans speak, purring starts in a cat’s brain and is produced through inhaling and exhaling. A repetitive neural oscillator sends messages to the laryngeal muscles, causing them to twitch at a rate of 25 to 150 vibrations each second. This causes the vocal cords to separate with each breath. A “true purr” is produced solely through the respiratory cycle and is not the same as a meow or other sounds cats produce.

Purring is most common in domestic cats, but it is also found in the Felidae family including bobcats, cheetahs, and pumas. Although you may hear big cats such as lions, tigers, jaguars and leopards produce purr like sounds at the zoo, this is not considered a true purr.

The Rumors are True…

…”Purr Therapy” is a real thing! Cats purr in a frequency range from 40 to 120 Hz; a frequency known to be medically therapeutic including promoting bone and tissue regeneration. That’s right, your cat could be good for your health! This philosophy comes from the idea that a cat’s purr ensures their bones do not become weak during all those cat naps. This frequency can also help reduce swelling, heal muscles and lower blood pressure.

Purring doesn’t only calm cats, but humans as well. In fact, recent studies show that cat owners are 40 times less likely to have a heart attack. So the next time you are feeling sick or upset, curl up with your furry friend and give them a little extra love.

Learn End of Life Care for Your Pet

Learn The Game of Rescue 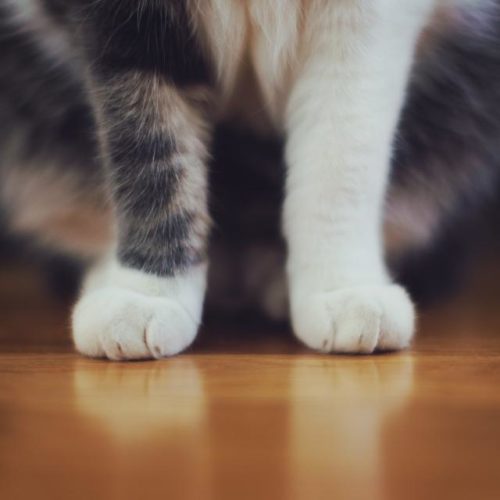 Should I Declaw My Cat?
Learn

What if Pets Could Talk for 5min?
Learn
5 Mistakes You’re Making When Training Your Dog
Learn

Poem Written By A Dog Abandoned At An Animal Shelter
Learn

5 Spots to Dine with your Dog in Houston